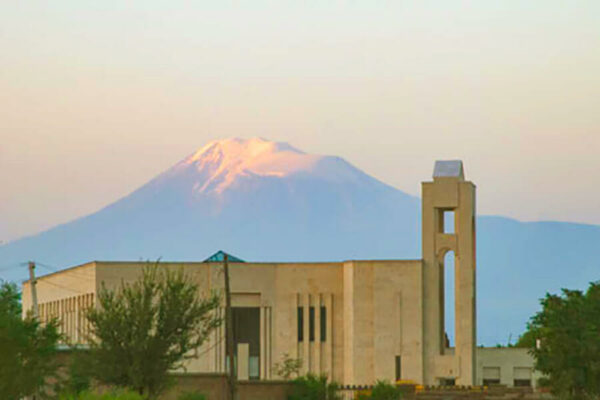 It’s not a large country. With an area of just 30,000 km (about half the size of Tasmania) and a roller-coaster terrain with mountains rearing up to 4,000 metres above sea level, Armenia is a bonsai nation whose people seem to have been hewn from the landscape itself.

Rugged, down-to-earth and open-hearted – these are the most endearing traits of Armenian people. They are constantly giving of themselves and expecting nothing in return, and if by chance you ARE able to offer something in return – even something as simple as a smile – then they appear to be genuinely delighted.

When you come to a country that has suffered and endured so much for so long (including Mongol and Persian invasions as well as the “Armenian Genocide” of 1915), you realise that contentment comes from small things, such as beautiful sunny weather, stunning natural scenery, bountiful nature and, it has to be added, plenty of home-made mulberry vodka.

Despite its small size, Armenia is divided into eleven provinces, each with its own dialect, climate and lifestyle. When it’s 40 degrees in the capital Yerevan, there are still snowdrifts on the high mountains of Syunik province. And while much of the country is devoid of tree cover, the river valleys are lush and fertile, yielding an astonishing range of produce – from the ubiquitous grape-vine to apricots, pomegranates (a national symbol), walnuts and organic vegetables.

And the honey! With a landscape carpeted in wildflowers throughout spring and summer, Armenia produces what has been described as the world’s best honey.  “This is such a poor country that we didn’t have any pesticides to destroy the bees”, says beekeeper Mushé. “I have over 50 hives, and have never seen any decline in bee numbers.” 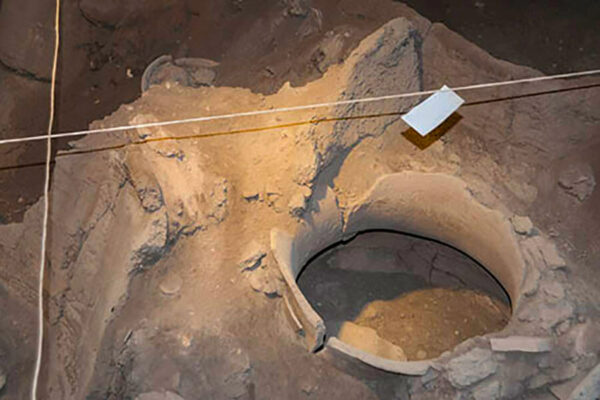 I set out to explore this intriguing country, starting in the northwest “art deco” city of Gyumri. Along the road to Gyumri the land seems and feels pre-ancient, strewn with limestone and tufa outcrops that seem to proclaim their right to rise above the earth and become part of the built environment. Indeed, throughout Armenia it is rare to find a building that is NOT constructed of stone – from salmon-coloured volcanic tufa to slate, limestone, basalt and porphyry.

The clay too yields up its usefulness. At Gyumri Ceramics, no fewer than 45 varieties of clay of different densities are used in producing craft objects – vases, cups and so forth. The clays are pulverised, blended, moulded, fired and then coloured and glazed. Master craftsman Vaché puts it like this: “Clay is like a 14 month child when it starts toddling. It needs to be coaxed and shown the right way.”

But in contrast to the Chinese model, this is not production for production’s sake. Far from it. As Vaché explains, “Whenever Armenian artists wanted to make something, they always used to be questioned as to why they wanted to make it.” The result is that Armenian homes are usually adorned with a tasteful range of handcrafted products rather than a surfeit of cheap mass-produced imports.

Gyumri was also the birthplace of the early 20th Century mystic G. I. Gurdjieff. His work is celebrated in the “Gurdjieff Room” at the boutique hotel Villa Kars. In the courtyard of Villa Kars the Gurdjieff Ensemble, who performed at the Canberra International Music Festival in 2014, gives a rousing performance of some of Gurdjieff’s music on authentic Armenian instruments, many deriving from Persian sources.

A stroll through Gyumri, which was hit by a catastrophic earthquake in 1988 in which up to 50,000 people died in a space of just eight minutes, reveals the extent of the earthquake damage as well as the extraordinary rebuilding effort now underway.

One building that mercifully survived the quake is the 1898 Aleksandropol Brewery (after the city’s name during Tsarist times), a German-established plant that produces arguably the country’s best beer, Aleksandropol Lager. There’s even a pipeline under the road from the brewery to the funky Poloz Mukuch Restaurant, opposite. This is the best use for underground piping that I’ve ever come across!

Gyumri is also home to many other crafts, including intricate hand-crafted ironwork. One of the local blacksmiths, Aram Seksinian of the Irangyuni Forge, slaves away in 35 degree heat over a hot anvil, producing the ornamental wrought-iron scrollwork that will later decorate restaurants, galleries and private homes throughout the country. 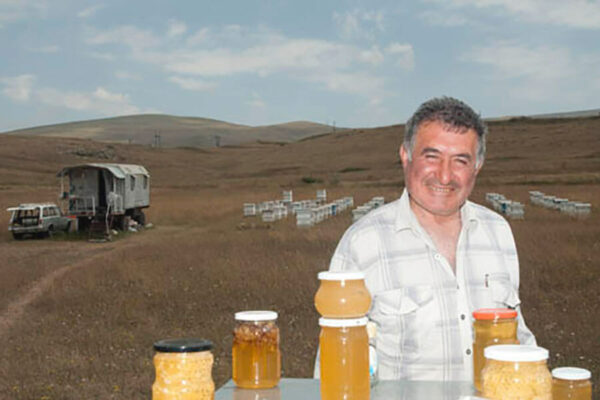 One establishment using Gyumri ironwork is the 85 year old Voskevaz winery, in the Aragatsotn region northwest of the capital Yerevan, recently remodelled by artist Gago Ognassian. The vineyards, at an altitude of 1600 metres, produce a trademark wine using the millennia-old Areni Noir grape variety. It’s a stunning wine, with incredible depth enhanced by ageing in Armenian oak from one of the country’s few forested regions, the south-eastern Dilijan province.

At the nearby Agarak archaeological site, with over four square km of rock tombs dating back 3,000 years, archaeologist Boris Gasparyan points out the use of wine in the burial ceremony. To the ancient Urartians, wine served as “a covenant between gods and humans”. Wine vats have been dug out the rocks, with in many cases a horse-shoe shaped altar above the vat.

Even older are the wine vats in Areni 1 cave, in Khor Virap province.  Seeds from the Areni noir grape variety – the same as that used at Voskevaz winery – were discovered in the cave in 2007, and have been dated to 4,200 BC, making this the world’s oldest winery. The excavations are a huge undertaking, and are expected to reveal many more finds.

The visitor to Armenia will realise before very long that this is a country with a profound intellectual heritage. With around 99% literacy and a unique 36-letter alphabet, the country punches way above its weight in the fields of education, science and technology. Chess is an integral part of the school curriculum. Sacred geometry and astronomy reached high points at the ancient temple of Garni and at Carahunge (or Karahunj), which is much older than Stonehenge and which allowed the ancient Armenians to measure the seasons and predict solar and lunar eclipses a whole millennium before the Egyptians were able to do the same.

Armenia’s famous monasteries and churches (the country claims to be the world’s first to have adopted Christianity as a state religion) are often built atop the ruins of ancient temples. The acoustics of many of these churches are totally gobsmacking, the sound reverberating within the walls and throughout your whole body as though the sound is coming from all directions at once. 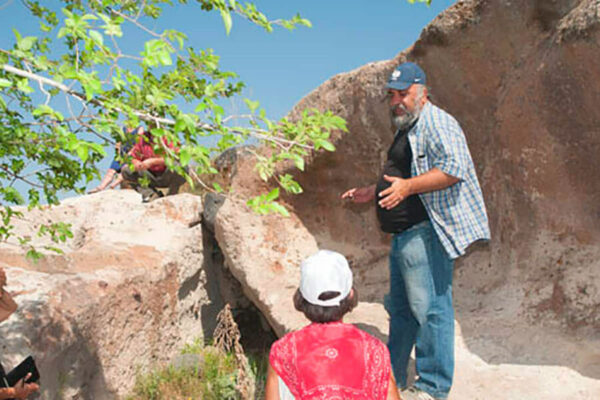 But not all Armenians agree with what they claim is the church’s misappropriation of the country’s ancient history. “Why impose a monotheistic religion in a polytheistic environment?” asks guide Rafik Santrosyan. “The adoption of Christianity was a purely political decision”.

Whether or not Santrosyan is correct, it’s hard not to be moved by the music of the Armenian Apostolic Church. I’m privileged to visit the country’s principal cathedral at Echmiadzin, on the day of the Blessing of the Grapes – the most important event on the calendar after Christmas and Easter. Rival choirs on either side of the conical-domed church pierce the skies with their ethereal, age-old chants – and it’s not difficult to imagine that some of their influenced has penetrated the very wine-producing essence of the grapes.

In the southern province of Vayats Dzor, the mineral waters around the town of Jermuk have been famous since at least 189 B.C., the date of the construction of Jermuk Fortress. During the days when Armenia was a part of the Soviet Union, Jermuk was known as the best mineral springs resort in the USSR – and indeed one of the best in the world. Sadly, with the collapse of the Soviet Union, Jermuk languished. But now, with the opening of the new Hyatt Place Jermuk Hotel, the resort with its internationally-renowned underground sources of medicinal waters is staging a big comeback. A double room in the Hyatt costs around $A100 a night, with older hotels offering full board at lower prices as well as a full range of world-class medical treatments.

The whole of the Jermuk area enjoys an abundance of mineral springs. High in the hills above the town are a number of natural springs where visitors can bathe for free, with the sounds of nature and the aromas of wildflowers adding extra benefits. 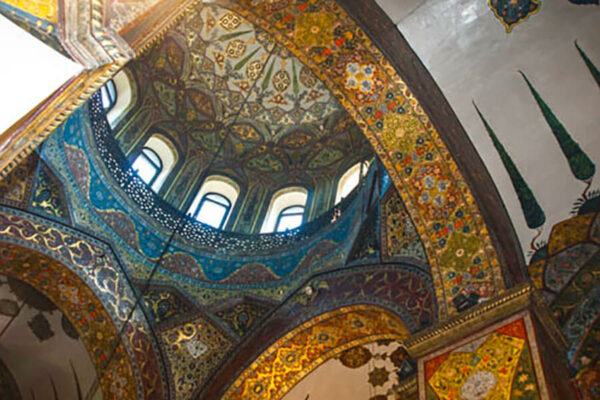 The high plateau of Syunik province, in the very south of Armenia, is home to one of Armenia’s richest assets. Going off-offroad, we venture up to 3,400 metres above sea-level, onto flower-studded grasslands that yield both medicinal herbs and natural dyes for the country’s famous carpets. In just one 2.5 square kilometre area, German archaeologists have recently uncovered over 10,000 petroglyphs (rock carvings) dating back some 7,000 years, when hunter-gatherers lived on the plateau. The plateau stretches 30 x 240 km – so there is more than just a little work still to be done.

On the outskirts of Yerevan, the Magerian carpet factory produces finely-woven carpets and rugs, using natural dyes from the very plants I’ve seen high up on the Syunik Plateau.  Uniquely, each Armenian carpet is double-knotted, making for a much stronger bond but also being much more time-consuming. One square metre of carpet will take a worker between 30 and 40 days to make. So it’s little wonder that Armenian carpets command high prices on the world market, in line with their exceptional quality

Finally, it’s back in the Armenian capital Yerevan, a surprisingly cosmopolitan city, with a Canberra-like grid superimposed upon an ancient settlement that will be celebrating its 2,800th birthday in 2018. People stroll the garden-filled squares at all hours, soaking up the sunshine and the heady range of civic attractions – from wine bars and jazz cafes to open-air music festivals.

No doubt about it – Armenia is a feast not just for the senses, but for the heart too!