WHY YOU SHOULD VISIT GEORGIA

Have you already chosen the destination for your next vacation?
Do you wish to discover stunning landscapes, fortified mountain villages, ancient churches, unclimbed peaks, wild beauty of the nature and hospitable people?
Visit Georgia – one of the most ancient and fascinating countries of the world!

The Great Caucasus – The Highest Mountain Range in Europe

Stretching for about 1200km between the Black and the Caspian seas the Caucasus Mountain system is considered a natural boundary between Europe and Asia. This is where you find summits over 5000m, including Mt. Elbrus (5642m) – the highest in Europe. Georgia has three peaks over 5000m – Mt. Shkhara (5068m), Mt. Janga (5059m) and Mt. Kazbegi (5047m) where according to the Greek myth Prometheus was chained.

At 2200m Ushguli is the highest settlement in Europe. The village of about 200 people is located in Upper Svaneti region, at the foot of Mt. Shkhara (5068m) – one of the highest summits of the Caucasus. Dotted with medieval Svanetian watchtowers Ushguli is also a UNESCO World Heritage site.

With its favourable geographic location Georgia has always been a connecting link between Europe and Asia, traversed by many routes including the famous Silk Road. This most important pre-modern trade road linking China with the West diverged into northern and southern routes, the northern one passing through Georgia. The traces of ancient caravans are still visible near Uplistsikhe cave town.

When it comes to wine-making, Georgia is blessed. Grapevine has been cultivated in the fertile valleys of Georgia for about 8000 years. With over 500 varieties of endemic grapes and the world’s first cultivates grapevines, the traditions of viticulture are entwined with the country’s national identity. It is also believed that the word “wine” is of Georgian origin (“gvino” in Georgian). 8,000-year-old wine unearthed in Georgia: Scientists have discovered the world’s oldest wine – a vintage produced 8,000 years ago. The find pushes back the history of wine by several hundred years. New discoveries show how Neolithic man was busy making red wine in Shulaveri (Georgia). Although no liquid wine from the period has survived, scientists have now found and tested wine residues discovered on the inner surfaces of 8,000-year-old ceramic storage jars. – The Independent, 2003. 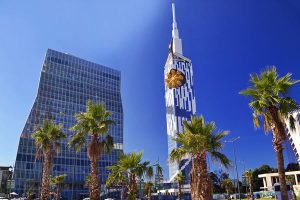 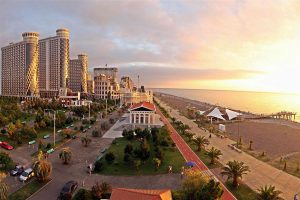 Land of the Golden Fleece

The fabulous kingdom of Colchis, mighty King Aeetes, enchanting Medea, legendary Jason and the Argonauts and invaluable Golden Fleece – an ancient Greek myth based in Georgia. Numerous gold artifacts found in the area and Tim Severin’s recreated voyage of 1984 prove that the story of the Golden Fleece could easily be true, especially considering Georgia’s centuries-old tradition of getting gold particles from flowing mountain rivers with the help of the fleece.

In the kingdom of Colchis there ruled the mighty King Aeetes. Alongside with other numerous riches he possessed the Golden Fleece – the skin of a ram with the Golden Fleece, which he kept under the guard of a sleepless dragon. Jason and the Argonauts sailed from Iolcus on the ship “Argo” and tried to take the fleece from Colchis to enable Jason to claim his inheritance. Fortunately for Jason, King’s daughter Medea fell in love with him. Medea had magical powers (the word “medicine” comes from her name), which she used to help Jason complete the assigned tasks and later steal the Golden Fleece.
The story of the Argonauts is a classic myth written by Apollonius of Rhodes in the 3rd century BC. The Golden Fleece is a symbol of cultural achievements of ancient Georgian tribes and mainly the high level of development of metal processing, gold in particular, although getting particles of gold from flowing mountain rivers was practiced in Georgia till the 20th century.

Georgian people shared the Message of God in the first century when the Holy Apostles Andrew the First-called, Simon the Canaanite and Matthata preached the Gospel here, although Georgia was officially converted to Christianity in 337 with the evangelism of St. Nino of Cappadocia. Being one of the world’s most ancient Christian countries, Georgia also preserves the most holy relic – the Robe of Christ.

Georgia has one of the world’s richest and oldest histories. Archaeological excavations provide clear evidence that Georgian tribes formed their statehood as early as the second millennium BC. The remains of the flourishing Georgian states of Colchis and Iberia can be seen while travelling in the ancient cities of Vani, Kutaisi and Mtskheta.

Georgia’s original and highly developed culture is proved by its unique language and script. Spoken by about 5 million people worldwide, Georgian language has an ancient literary tradition. Georgian alphabet was created in the 3rd century BC and is one of the only 14 existing scripts in the world. Earliest Georgian inscriptions are found in a church near Bethlehem (AD 430) and in Bolnisi Sioni church (AD 495) in the South-East of Georgia. The earliest Georgian novel also dates to the 5th century AD.

Homeland of the First European

This 1.7-million-year-old skull found during Dmanisi archaeological excavations is the oldest evidence of human habitation in Europe. It proves that there is almost one-million-year gap between Dmanisi and any European early-human site, making Georgia the homeland of the FIRST European.

This is the face that’s changing a thousand minds. It could be the face of the first human to leave Africa. And it’s not what anyone expected. This 1.75-million-year-old pioneer, found beneath the ruins of a medieval town called Dmanisi in the republic of Georgia, had a tiny brain – not nearly the size scientists thought our ancestors needed to migrate into a new land. And its huge canine teeth and thin brow look too apelike for an advanced hominid, the group that includes modern humans and their ancestors. Along with other fossils and tools found at the site, this skull reopens so many questions about our ancestry that one scientist muttered: “They ought to put it back in the ground.” – National Geographic Magazine